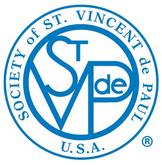 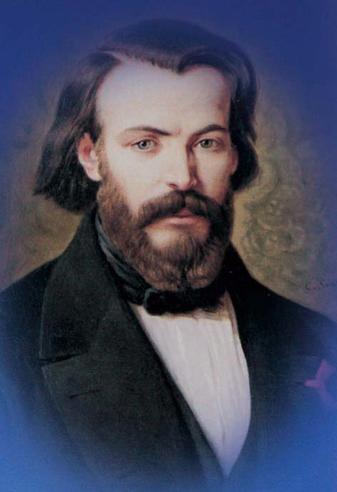 What is the Society of St. Vincent de Paul?

Members of the Society of St. Vincent de Paul (or "Vincentians" ) are men and women who strive to grow spiritually by offering person-to-person service to individuals in need. We are young and old. Our members come in every shade of skin color. Some of us are wealthy, some are financially poor, but all of us are blessed with an awareness that our blessings (time, talent or treasure) are to be shared with our brothers and sisters in need.

We know that we are not alone. We are part of an international society of friends united by a spirit of poverty, humility, and sharing, which is nourished by prayer and reflection, mutually supportive gatherings, and adherence to a basic Rule.

Energized by the awareness that service to our brother or sister in need is, in fact, an encounter with our Lord Jesus Christ, members of the Society of St. Vincent de Paul are keenly aware that poverty, suffering, and loneliness are present for millions in our communities. For that reason, we collaborate with all who seek to relieve need and address its causes.

The Society of St. Vincent de Paul offers tangible assistance to those in need on a person-to-person basis. It is this personalized involvement that makes the work of the Society unique. This aid may take the form of intervention, consultation, or often through direct dollar or in-kind service. An essential precept of the Society's work is to provide help while conscientiously maintaining the confidentiality and dignity of those who are served. The Society recognizes that it must assume, also, a role of advocacy for those who are defenseless or voiceless. Some 12 million persons are helped annually by Vincentians in the United States.

What is the vision of the Society?

Like that of its founder, Frederic Ozanam, the vision of the Society of St. Vincent de Paul "is to embrace the world in a network of charity."

What are the core values of the Society?

The Society of St. Vincent de Paul adheres to a group of core values; these are principles central to our creed and ministry. We believe...

In the dignity of the human person
In the identification of Jesus with the poor
In the preferential option for the poor
That Jesus is the Evangelizer and Servant of the poor
That growth in intimacy with Jesus is a lifelong process
That poverty of spirit is the primary beatitude
That our primary concern is charity and justice
That prayer is essential: personal and communal
In the virtue of humility: personal and corporate
In the virtue of charity, inside and outside the Society
In Divine Providence
In Friendship
In Community
In Simplicity

Does the Society have a mission statement?

Yes. A mission statement answers the who and what of an organization. It states in precise and concise language the composition and chief purpose of a group. The following is the Mission Statement of the Society of St. Vincent de Paul in the United States: Inspired by Gospel values, the Society of St. Vincent de Paul, a Catholic lay organization, leads women and men to join together to grow spiritually by offering person-to-person service to those who are needy and suffering in the tradition of its founder, Blessed Frederic Ozanam, and patron, St. Vincent de Paul.

As a reflection of the whole family of God, Members, who are known as Vincentians, are drawn from every ethnic and cultural background, age group, and economic level. Vincentians are united in an international society of charity by their spirit of poverty, humility and sharing, which is nourished by prayer and reflection, mutually supportive gatherings and adherence to a basic Rule.

Organized locally, Vincentians witness God's love by embracing all works of charity and justice. The Society collaborates with other people of good will in relieving need and addressing its causes, making no distinction in those served because, in them, Vincentians see the face of Christ.

How does the Society differ from other charitable organizations?

The Mission Statement of the Society answers the question specifically. The Society of St. Vincent de Paul is composed of women and men who seek their personal holiness through works of charity. In this essential way, the Society differs from charitable associations or agencies whose principal objective is not the spiritual advancement of their members but the doing of good for someone else. President-General Adolphe Baudon, in his Circular Letter of January 1, 1877, writes:

"It is laid down in our Rule, and it has been always understood among us, that in uniting to serve our masters the poor, as St. Vincent de Paul expresses it, our object is not only to relieve material misery, a very laudable purpose in itself, but to aspire, especially, through the practice of that most sublime of virtues "charity" to render ourselves better and more fervent Christians, and to make our poor enter on the same path, if we have the happiness of succeeding."

In his Circular Letter of December 12, 1915, Vicomte Hendecourt, President-General writes:

"The Society has two aims: to do a great deal of spiritual good to its members through the exercise of charity and to do a little spiritual and temporal good to a few poor families in the name of Jesus Christ. If it did not continually seek to combine these two aims, it would lose its raison d'etre. If it were to seek only the holiness of its members through pious exercises, there is no lack of Confraternities and Third Orders to meet that need. If on the other hand, it were to seek only the relief of the temporal miseries of the poor, it would only add one more to the list of public and private institutions founded for that purpose."

The Mission Statement is clear: Vincentian ministry is a means for acquiring holiness. The ministry of a Vincentian to those and with those who stand in need is the powerful means that affects the holiness of life for the individual Vincentian. Vatican II states that the principal means of holiness for bishops and priests in their ministry. This applies to the laity also, because, in attending to the needy and suffering, a Vincentian is ministering to Jesus Christ himself.

How did the Society get started?

Frederic Ozanam left his home in Lyon, France, in the autumn of 1831, for Paris. He registered in the School of Law at the Sorbonne, University of Paris.

Frederic collaborated with Mr. Emmanuel Bailly, editor of the Tribune Catholique, in reviving a student organization which had been suspended during the revolutionary activity of July 1830. They called their new association "The Conference of History." The group met on Saturdays to discuss various topics, everything but politics.

At one of their meetings, a student challenged Frederic and the practicing Catholics. He admitted that the Catholic Church had done much good work in the past, but "what do you do now?"

Frederic called for a meeting of five of his friends; they agreed to meet at Mr. Bailly's office. The date was April 23, 1833, Frederic's twentieth birthday. Inspired by their words, Frederic decided to found the "Conference of Charity" to assist the poor. Emmanuel Bailly, the married layman, was chosen by the six students as their first President. In a short time, they changed their name to The Society of St. Vincent de Paul in honor of their patron.

When was the Society first established in the United States?

While historians are not certain about some details, there is no doubt that the Society of St. Vincent de Paul was established in St. Louis, Missouri at the Basilica of St. Louis, King of France, popularly called "The Old Cathedral," in 1845.

Father John Timon, CM, an American Vincentian priest from Pennsylvania, and later Bishop of Buffalo, New York, was the one who brought copies of the Rule of the Society of St. Vincent de Paul back from Dublin, Ireland, to St. Louis. Timon talked to various people about the Society and its wonderful work with the poor.

Bishop Peter Richard Kenrick, the successor of the first Bishop of St. Louis, Joseph Rosati, CM, asked Father Ambrose Heim to establish the Society of St. Vincent de Paul and be its Spiritual Advisor. Father Heim was known by all for his extraordinary zeal and ministry with the poor. He became known as "The Priest of the Poor." 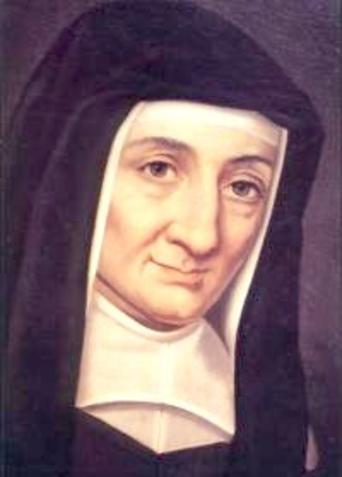 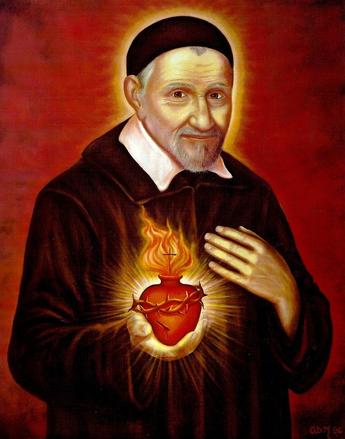 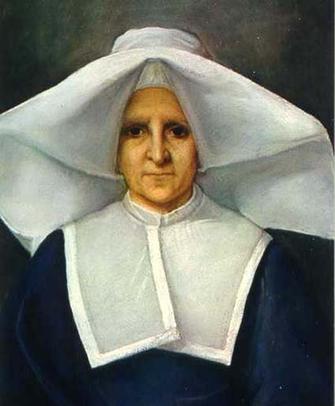 ​ Who was St. Vincent de Paul?
​
St. Vincent de Paul (1581-1660) was the founder of the Congregation of the Mission, Daughters of Charity, Confraternities of Charity, and Ladies of Charity. A man of deep faith, keen intellect, and enormous creativity, he has become known as the "The Apostle of Charity" and "Father of the Poor." His contributions to the training of priests and organizing parish missions and other services for the poor shaped our Church's role in the modern world.


Who was St. Louise de Marillac?

St. Louise de Marillac (1591-1660), a contemporary of St. Vincent, was inspired and directed by Vincent's spiritual leadership. She was Vincent's collaborator in founding the Daughters of Charity and organizing hospitals for the sick poor, asylums for the orphaned, workshops for the unemployed, championing literacy for the uneducated, and establishing standards for local charities. Louise was a wife, mother, teacher, nurse, social worker, and religious foundress.


Who was Blessed Frederic Ozanam?

Who was Blessed Rosalie Rendu?

Blessed Rosalie Rendu, DC (1786 - 1856) was a Daughter of Charity who served for 54 years in the Mouffetard area, the most impoverished district of Paris. Emmanuel Bailly, the President of the Society, sent the founding members of the Society to Sister Rosalie for guidance and direction. Sending them on home visits, she formed them in the spirit of St. Vincent, teaching them how to serve the poor with respect and compassion.

How is the Society organized?

The Council of the United States of the Society of St. Vincent de Paul provides leadership and support for the growth and health of Society Councils, Conferences, and Special Works. The National Council Office, located in St. Louis, enables the Society to better serve their local communities by creating materials for the spiritual formation of the members; networking information on advocacy and justice issues; and facilitating the response to the needs of those who are poor throughout the world by Twinning and giving assistance to victims of disasters.

The Organizational Chart of the Society is as follows: